Public debate continues to rage over new security measures being used on passengers at our nation’s airports. At the center of the controversy are the body scan machines (“naked scanners“) that uses radiation to create naked images of us for security personnel to review. If the passenger refuses the naked body scan then they every part of the body is touched head to toe during a pat down procedure. Following the much publicized “underwear bomber”, the body scans and pat downs are designed to catch contraband even if it’s hidden near a persons genitals. The body scan program is being opposed by the American Pilots Association, Airline CEOs, the Libertarian Party, consumer rights groups, and religious groups. In response, TSA claims the body scan images are never retained, they claim the radiation is minimal and downplay the privacy and religious concerns with being viewed naked at the airport. 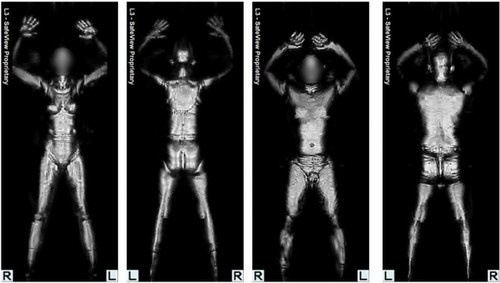 As to the first claim of never retaining naked body scan images, we now know that isn’t true. It was recently discovered 35,000 body scan images, stored by U.S. Marshals in Miami, were obtained by a technology blog. Of those 35,000 images,100 naked body scans were posted on the internet. I imaging the thought of seeing yourself naked online does not appeal to most people.

Even if your naked images never make it to the internet, many describe the process of being viewed naked in the airport as humiliating. It was this type of humiliation that led to violence at Miami International Airport in September of this year. A TSA worker in Miami was asked to submit to a body scan to illustrate the use of the machine to fellow coworkers. In the weeks following the body scan demonstration, he was taunted by coworkers about the size of his genitalia. According to the police report, after the taunting became too much to take, the TSA employee beat one of the taunting coworkers in the parking lot with a police baton.

It is reported that there have been no independent studies to determine the radiation risks passengers are exposed to by the body scans. Even pregnant women are put through the body scans. From my experience as a personal injury lawyer, doctors almost never order X-rays, CT scans, or other similar tests on pregnant women because of the risks radiation poses to the baby. Personally, I trust medical doctors over government employees. According to a recent government study, pregnant women and children should not be subjected to airport body scans. Reports like this certainly don’t help the TSA’s position.

An organization called EPIC (Electronic Privacy Information Center) has filed a lawsuit to stop the TSA’s use of body scanners pending an independent review of the program. EPIC calls the program “unlawful, invasive, and ineffective” and argues in their suit that the federal agency’s use of full body scans violates the Administrative Procedures Act, the Privacy Act, the Religious Freedom Restoration Act, and the Fourth Amendment.

The legal arguments for and against the use of full body scanners are layed out in the briefs. An interesting read if you have the time, EPIC’s Opening Brief for Petitioners, EPIC’s Emergency Motion for Stay and the government’s Opposition to Emergency Motion for Injunctive Relief. The entire legal challenge may come down to this statement from EPIC’s brief “Respondents have broad authority to undertake screening of travelers at airports in the United States, but such authority is not unbounded.” I hope that is true. I’ve read reports where the newest terrorist plot involves hiding explosives in body cavities. TSA has acknowledged body scans will not detect contraband that has been hidden in that method. If there are no restrictions on the government’s authority to search us if we choose to fly, then based on the current pattern of reacting to each terrorist plot, body cavity searches may be next.