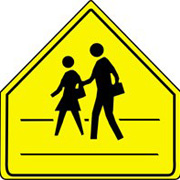 The Atlanta metro area, including Sandy Springs and Marietta, was listed in the top 10 most dangerous cities for pedestrians in 2007-2008 by the lobby group Transportation for American. As a Marietta personal injury lawyer that grew up in metro Atlanta, I find it most interesting that of the ten most dangerous cities for walking, nine of them are in the south. The study found the most dangerous metro areas are characterized by sprawl and auto-oriented development patterns. The most troubling finding by the group is that there are 5,000 preventable pedestrian deaths in the U.S. each year.