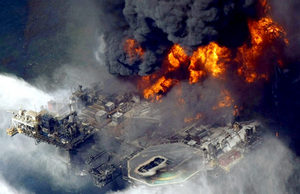 It has been revealed through recent Congressional hearings that BP ignored warning signs and continued to drill just hours before the oil rig, Deepwater Horizon, exploded killing 11 people and causing an environmental catastrophe of historic proportions. BP has admitted fault, but BP executives testified that Transocean (the offshore drilling contractor) shares responsibility because the Blow Out Preventer, or BOP, failed to operate. Transocean, while acknowledging the failure of the BOP, has pointed the finger at Haliburton for failures in the cementing process. It appears the Gulf Coast Disaster could have been prevented at several different stages and there is plenty of blame to go around.

One victim, twenty-eight-year-old Gordon Jones, died in the explosion leaving his widow, Michelle, to care for their two young sons. The Jones family and the families of the other 10 workers that died are severely limited in their ability to recover damages because of the Death on the High Seas Act (DOHSA). “BP is immune from entirely compensating these families for the horrible way in which their loved ones died and the relationship they have now lost,” said Anthony Tarricone, president of the American Association for Justice. “DOHSA needs to be amended to provide fair remedies to victims of other maritime disasters on the high seas, starting with the 11 brave men who died on the Deepwater Horizion.”

BP and Transocean are further protected by the Oil Pollution Act (OPA) and Limitation of Liability Act (LOLA). While experts estimate the economic damage to the Gulf Coast in the Billions, the OPA caps BP’s liability at $75 million. Additionally, Transocean is seeking to limit it’s liability to $27 million by relying on the Limitation of Liability Act. The law was passed in 1851 to allow ship owners to limit liability to the post-accident value of the vessel and cargo. Transocean has reported the oil rig was worth $650 million before the explosion and is now worth less than $27 million laying sunken on the ocean floor.

BP, Transocean, and Haliburton will continue to receive tongue lashings from the Federal Government for causing this monumental disaster, while simultaneously enjoying significant immunity for the harms they caused. Lawyers representing small businesses are seeking changes to these maritime laws. Unless American maritime law is amended, the families of those that died and thousands of gulf coast businesses will face an uphill battle for justice.