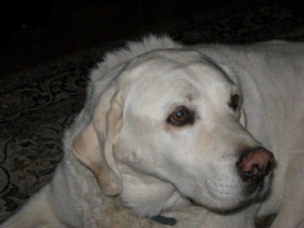 State Farm Insurance made an interesting decision when they recently asked a family to pay for repairing a broken bumper after their dog was struck by a vehicle and killed. Kim Flemming’s 12 year-old yellow Labrador Jake was struck by the vehicle in the family’s quite neighborhood just outside of Aurora, Ontario. Ms. Flemming had just gotten home from work when a man came to the door to let her know he had run over the family pet. “I got to the road and he was dying,” Fleming told local media. “He died in my arms.”

Just as the Flemming’s were beginning to get over the tragedy they received a bill from State Farm insurance in the amount $1,648.95 for the man’s bumper who ran over Jake. The letter, that included five pages of documentation and three pages of photographs, said that through their investigation they determined Ms. Flemming to be “100-per-cent responsible” for the damage to the vehicle, and stated, “As such, we are looking to you for reimbursement.” The bill included costs for parts and labor for replacing the bumper, as well as the cost of the rental car for the person who ran over Jake. State Farm spokesman John Bordigon responded to media questions over the bill with little compassion stating, “They could have made sure their dog wasn’t free on the roadway.”

As an insurance claims lawyer, I find it insulting that State Farm added insult to injury by asking the family to pay for the damage of the car that killed their dog. If State Farm sues this family, I’m sure there will be no shortage of lawyers willing to defend the Flemming’s for free. Kim Flemming’s daughter Katherine said, “We’ve lost a member of our family but we’re supposed to pay for the damage to her bumper? That’s just wrong. Isn’t the driver responsible for how they operate their vehicle?”
Though State Farm contends the law on their side, the family has informed the insurance company they do not plan to pay the bill, and are considering other options.