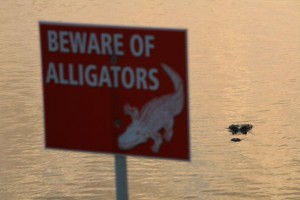 The Georgia Supreme Court has agreed to hear a case that tests the extent to which property owners are responsible for others injured by animals on their property.

The Homeowners Association of The Landings, a subdivision on Skidaway Island, just outside of Savannah, GA, is being sued in relation to the death of Gwyneth Williams. Williams, 83, was house sitting at her daughter’s home inside the Landings, and was attacked by an 8-foot alligator in October 2007. The alligator was later killed, and both Williams’ hands as well as one of her legs was found inside the stomach of the animal
In Georgia, the law normally protects property owners from lawsuits stemming from accidents caused by wild animals, but lawyers representing Williams’ family say this is a different situation. Attorney Michael Connor says that there nothing at all wild about the property in question, “It is a very contrived environment. There are 160 lagoons on the development. And all those lagoons are man made.”

Connor further explains, “The landings stocked the lagoons with the fish, which fed the alligators, and connected the waterways to create an “alligator superhighway.” He says the Landings, “Knew the alligators were dangerous,” and they have had prior reports of problems. Connor feels that the alligator could, and should have, been easily discovered and removed by a responsible maintenance program by the HOA of the Landings.

Lawyers for the Landings argue that a ruling against them would place an undue burden on landowners, and that their client should be shielded from the lawsuit under the doctrine of animals ferae naturae. The doctrine says that a landowner cannot be liable for the acts of animals ferae naturae(indigenous wild animals) occurring on his or her property unless the landowner has actually reduced the wild animals to possession or control, or introduced a non-indigenous animal to the area. In their appeal to the Supreme Court, the Landings attorney Walter Ballew wrote, “That this rationale (ferae naturae) makes the most sense from a public policy view, as a landowner should not be penalized for the presence of wild animals on his or her property.

The Georgia Supreme Court is scheduled to hear the case in February of next year.

As a Georgia personal Injury attorney who often deals with premises liability cases, the outcome of this will be intriguing as it could potentially change the duty of landowners in the State of Georgia.