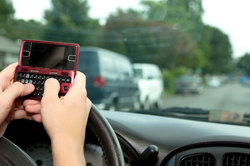 Presuming the Governor signs off on the new legislation, it will soon be illegal to text while driving in Georgia. Personally, it seems odd we need a law to tell people to refrain from typing messages on their smartphones while operating a two ton metal box in speeds in excess of 70 miles per hour, but we do. As a Georgia personal injury lawyer, I’ve seen way too many deaths and catastrophic injuries caused by driver distractions, such as texting and talking on cell phones. I was pleased to see the Georgia Legislature address the problem.

As the recent legislative session closed, two bills passed addressing this issue. First, SB 360 (also known as the Caleb Sorohan Act) bans texting while driving. The act was named for a Georgia teen that died while texting and driving. Also passed was HB 23, which prohibits teen drivers from using a cell phone for any purpose while driving. The fine for either offense is $150.00.

As we have previously discussed on this blog, recent studies suggest driving while distracted by a cell phone increases the risk of a collision twice as much as driving while intoxicated (.08 Blood Alcohol Content). While enforcement of these laws may prove difficult at times, this is an important issue that needed to be addressed. This Legislation is a step in the right direction and hopefully many tragic collisions will be avoided.