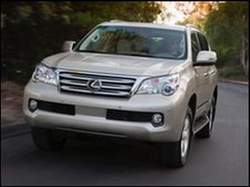 In last week’s blog I passed on Consumer Reports warnings concerning the new Lexus GX 460. Toyota initially responded to the report stating “We’re concerned with the results of Consumer Reports testing on the Lexus GX 460 and their suggested buyer recommendation. Our engineers conducted similar tests during the development of the new GX and had no issues…Please keep in mind that the 2010 GX 460 meets or exceeds all Federal Government test requirements.”

On Monday of this week, Toyota said they are recalling the Lexus GX 460 and they have a software update that will fix the problem. According to Consumer Reports, the vehicle is susceptible to serious rollover collisions due to a steering problem that the electronic stability control system fails to correct. If the software fix works, this is good news for consumers unfortunate enough to have purchased this vehicle. However, what puzzles me is how Toyota claims there was no problem on April 13th, then a few days later, on April 19th has a software update developed that will fix the problem. Based on this time line, it certainly appears that Toyota had a software fix waiting just in case anyone caught the safety issues with their new luxury SUV. If that is the case, then Toyota has been caught once again putting consumers at risk by failing to report known safety issues.