If you are the owner of one of the 3 million Jeep Grand Cherokees made between 1993 and 2004 there may be cause for concern. The consumer watchdog group, The Center For Auto Safety, is pushing the U.S. Government for a recall of a poorly protected fuel tank that is causing fire in some rear-end crashes in the Jeep Grand Cherokee. The National Highway Traffic Administration (NHTSA) acknowledges that there have been 44 Grand Cherokee Crashes and 55 deaths since 1992 where fire was listed as the most harmful factor. 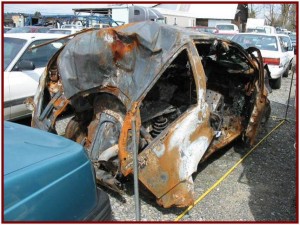 The problem stems from the placement of the fuel tank in the 1993 – 2004 Jeep Grand Cherokee. The tank, which is made of plastic, is positioned below the rear bumper and behind the rear axle, which provides very little protection to the tank in the case of a rear end collision. Paul Sheridan, a former safety manager at Chrysler, says that the “design of the tank if a fundamental safety defect. No Question about it.” Sheridan explains that when one of these Jeep’s is hit from behind that another vehicle could easily slide under the rear bumper of the Jeep and tear the tank open. This creates a situation where gas covers the interior of the Jeep creating a potential disaster if there is any sort of spark.

At this point, it appears Chrysler has no intentions of recalling these vehicles. Often it requires one or more large verdicts from product liability lawyers before a large company like Chrylser will be prompted to issue a recall and make safer choices in design. If you are the owner of one of these Jeep Grand Cherokee’s it may be a prudent decision to visit your dealership to see if anything can be done to further protect your fuel tank in the case of a rear end collision.