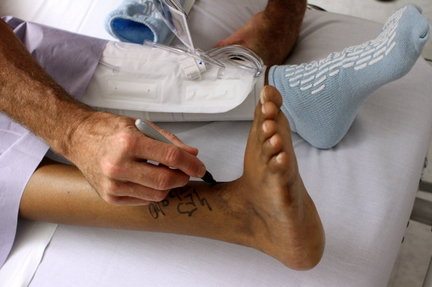 With the incredible amount of medical technology available in the United States it is hard to believe that doctors are performing procedures on the wrong patient or body part with regularity. Wrong site surgery is a very real problem in Georgia and the rest of the country. As a medical malpractice lawyer, I’ve discussed this problem with numerous doctors and they have all agreed that wrong site surgeries should never happen and are easy to avoid. Amazingly, according to a 2006 study looking at the frequency of surgical errors in the United States, the findings suggest that there could be as many as 2700 mistakes each year where a surgery is performed on the wrong body part or patient. This is about seven per day.
Recently Jesse Matlock, a 4-year-old Oregon boy was a victim of this sort of surgical error when he went in for a procedure to operate on a lazy right eye. Though the doctor performed several safety steps, including writing her initials above the boy’s right eye, and performing a final safety “time-out,” making sure that the correct patient is about to undergo the correct procedure, the doctor still managed to operate on the boy’s healthy right eye. In explaining her mistake the doctor said, “Frankly, I was at the head of him, and I lost my sense of direction and the mark got covered up. By the time I realized it was the left eye, it was all said and done.”
One question for anyone about to go into an operation is obviously what causes this type of error to occur? A 2010 study done for the Archives of Surgery found that among operations on the wrong part of the body, 85% were due to errors in judgment, with 72% of those doctors not performing a “time-out” as required by protocol. The study found the groups most frequently involved in operations on the wrong patient were doctors of internal medicine, who were responsible for 24% of these types of mistakes; orthopedic surgeons were responsible for 22.4%, general surgeons for 16.8%, and anesthesiologists for 12.1%.

Dr. Kenneth Kizer, former CEO of the safety advocacy group National Quality Forum, says that wrong-site surgeries are preventable and should never happen. He says efforts to prevent these types of surgical errors have gotten better over the past decade, but there is still a great deal of room for improvement. One of the main problems, according to Kizer, is that in the operation setting there are a number of ways that errors can happen because there are normally dozens of doctors that will be involved in a case that goes into an operating room, which increases the chances of an error occurring. In addition, Dr. Martin A. Makary, as an associate professor of surgery at Johns Hopkins University, has found that many times the people working together in the operating room do not know each other and are reluctant to speak up when they see in an error taking place, often times because of the surgical hierarchy placing doctors above nurses and other staff. According to Makary, a nurse or low-level person in the surgical hierarchy is often reluctant to speak up even though they may sense something is wrong because of the intimidation of the operating room hierarchy.
Hopefully no one reading this article will ever have to deal with this sort of traumatic event in their own life, but there are things you can do to decrease the risk of a wrong-site surgery. Dr. Kizer recommends six things that should always be done before going into an operation:

1. Ask, “What are you going to do to ensure that you don’t operate on the wrong site?”
Kizer says that asking this question explicitly puts the concern on the doctor’s radar. “Patients have to be aggressive sometimes,” Kizer said. Also, if someone new is seeing you, this question may help to remind them to review your records and clarify one more time.

2. Request a “time-out” just before anesthesia.
The Joint Commission’s Universal Protocol recommends that the operative team take what is called a time-out right before surgery. That’s a time when all relevant members of the surgical team stop and communicate to ensure they are all in agreement on what’s about to happen.

Diane Pinakiewicz, president of the National Patient Safety Foundation, says patients should consider themselves critical members of the health-care team.

“Patient involvement is one of the keys. It’s imperative that they be proactive,” she said.

Pinakiewicz suggests that before going under anesthesia, the patient or the patient’s caregiver should not be shy about requesting a time-out or asking the head of the surgical team whether they have taken one.

3. Say: “My name is John Smith, and my birthday is January 21, 1976.”
Patient advocates say to make sure your name is double- and triple-checked and that prior to surgery, whether you’re speaking with the surgeon, the anesthetist or the nurse, make sure everyone involved in your care knows exactly who you are.

CNN’s senior medical correspondent, Elizabeth Cohen, advises that if your name really is John Smith, you should also include your middle name.

Don’t underestimate the fact that patients in the same hospital may have similar names with slightly different spellings. Stating your full name and birthday can help ensure that you aren’t confused with another patient.

4. Don’t rush through the informed consent form.
Before having surgery, patients fill out a consent form, which details what specifically is being done and the possible risks and complications. Kizer says sometimes patients glaze over the details because they don’t like to hear about the horrible things that can happen.

He says this is a missed opportunity to find potential errors that may have made their way that far.

5. Make sure your doctor initials your site.
The American Academy of Orthopaedic Surgeons urges its members to sign their initials directly on the site before surgery. Make sure your surgeon — not someone else — does the signing and that it’s in the right place. The protocol may vary from hospital to hospital, but the bottom line is that patients should make sure the surgeon clearly marks the proper surgical site before you leave the pre-op area.

6. Trust your gut.
Jesse Matlock’s parents said they initially had a bad feeling about how the surgery would go when, on the morning of the procedure, one of the surgical nurses mentioned paperwork that said the little boy would need surgery on one or both eyes.

“There’d been no mention of both eyes until then,” Jesse’s mother Tasha Gaul said. “I immediately had this feeling of dread.”