By now many have heard of the perverse agenda of a group that identifies themselves as the Westboro Baptist church. This small group led by Fred Phelps, Sr. often shows up at military funerals and other high profile tragedies with protest signs designed to outrage and offend the victims. For example in West Virginia where a cave in killed 25 miners they held up signs “Thank God for Dead Miners.” At military funerals the signs read “You’re Going to Hell,” “Semper Fi Fags,” and “Thank God for IEDs.”

On March 3, 2006, Lance Cpl. Matthew Snyder, US Marine Corps, died in Iraq. When the family buried this young hero, Westboro Baptist church was there, at the funeral, with their hate filled signs. In addition, they distributed fliers with young Matthew’s picture and the words “Burial of an Ass.” Freedom of speech was alive and well and none of the protesters were arrested or prevented from sharing their hate of America and our troops with anyone that would listen. However, all actions have consequences. The Snyder family filed a civil suit against Fred Phelps and his church and on October 31, 2007 a jury returned a verdict of $2.9 million dollars in compensatory damages with an additional $8 million in punitive damages. In our system, the jury speaks for the community and punitive damages are designed to punish outrageous conduct and deter future conduct. The judge reduced the punitive portion of the verdict to $2.1 million for a total verdict of $5 million dollars.

In a surprising and controversial decision, the United States Court of Appeals for the Fourth Circuit reversed the trial court judgment, ruling Westboro’s protests were protected from civil liability by the First Amendment.

Recently the United States Supreme Court agreed to hear the case of Snyder v. Phelps et al. The issue the Supreme Court will decide is whether the First Amendment protects protesters at a funeral from liability for claims of intentional infliction of emotional distress. On October 6, 2010 the Supreme Court heard oral argument in this case and the transcript is an interesting read.

It is undisputed the Westboro Baptist Church and the Phelps family use the funerals of dead soldiers to promote their homophobic agenda. By engaging in the outrageous behavior of attacking families at funerals, a time when they are most vulnerable, Westboro gains large amounts of publicity. Ultimately publicity is what they crave without any consideration to the collateral damage inflicted to emotional states of mourning families. As a Georgia Trial Lawyer, I believe in the First Amendment and the Constitution. However, the First Amendment has never provided blanket immunity from civil claims. Hopefully, the Snyder family will obtain justice in this case and the Supreme Court will rule that Westboro Baptist Church is responsible for the harms they cause when they protest at funerals. 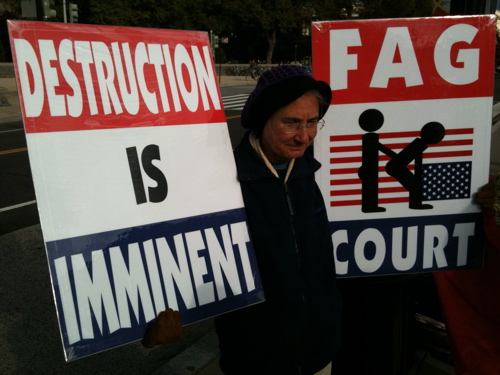 (Phelps family member protests outside the U.S. Supreme Court prior to oral argument)