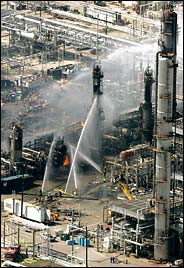 BP will pay a record $50.6 Million OSHA fine for numerous safety violations discovered at a Texas City oil refinery last year. The prior record for an OSHA fine, $21 Million, was also issued against BP for multiple safety violations at the exact same Texas City refinery a few years earlier. OSHA issued the previous record holding fine following a deadly explosion at the BP refinery, in March of 2005, that killed 15 people and injured 170. To say BP did not learn it’s lesson following the tragic 2005 explosion is an understatement.

Specifically, in this most recent round of fines, OSHA issued the BP Texas City refinery 709 citations with a total fine exceeding $80 Million, finding the exact same safety problems at the refinery BP was punished for in 2005. Labor Secretary Hilda Solis stated “The size of the penalty rightly reflects BP’s disregard for workplace safety.” BP accepted 270 violations and agreed to pay $50.6 Million, but is still contesting over 400 of the citations.

Jordan Barab, the deputy director of OSHA, when asked whether BP admitted wrongdoing at the Texas City refinery he said “They have recognized and accepted every citation that we have levied on them” related to their failure to correct violations stemming from the 2005 settlement, “That speaks for itself.”

BP’s problems at the Texas City refinery are unrelated to the Deepwater Horizon oil rig explosion and natural disaster. However, the reports of ignored safety regulations with catastrophic consequences is becoming a theme with this company.